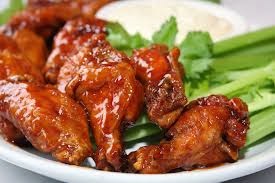 Many more years ago than I'd like to admit, and after I'd finished up my military commitment and returned to Buffalo, NY to finish my college degree, I got a nice little job as a bartender. Between work, the GI Bill and a small scholarship I was able to complete my degree without going into debt.

Earning that degree and avoiding debt were good things, of course, but my greatest reward was being in on the ground floor of the Buffalo Chicken Wings craze. Life doesn't get any better than that, you know? Okay, yeah, it does, but I wasn't getting much of it back then. Whatever.

Buffalo Chicken Wings were created at the Anchor Bar in Buffalo. The story goes that the owner was asked to come up with filling snack to feed a group of late arriving hungry guests. She deep fried a bunch of chicken wings--normally used to make stock--covered them with a special hot sauce and served them up with celery sticks and blue cheese dressing. The guests loved it and it soon became a staple item on their menu.

This was all well and good and the story might have ended there, but my boss stole their recipe (some say "recreated" but my money's on "stole") and the bar where I worked became the second in the city to serve Buffalo Chicken Wings.

Today, Wings are a standard bar food item all across the country. Sometimes they're good. More often they're mediocre. The problem is that people get too fancy. They bread them. Or they bake them. Or they add too many spices. People, don't do that! Wings are a simple recipe and generally the less done to them the better.

Here's my recipe for Wings 'n Things straight from the now-defunct tavern where I used to work:
There's another little tradition we do in Buffalo just before we gorge ourselves on wings on Super Bowl Sunday. A little background first.

You know, the Bills were the only NFL team ever to advance to four straight Super Bowl games. They are also the only NFL team ever to lose four straight Super Bowl games. They should have won the first one, but nooooooo. Someone missed a 47 yard field goal with eight seconds left. Someone named Scott Norwood. So every Super Bowl Sunday, after we say grace, but before we chow down, we all gather around in a circle and and stick voodoo pins in Scott Norwood bobble head dolls. It's childish, I know. But it's football. And a true fan never forgets the highlights and never forgives the lowlights. You doubt me? Just ask Bill Buckner.

Posted by Haggis Chihuahua at 9:03 AM